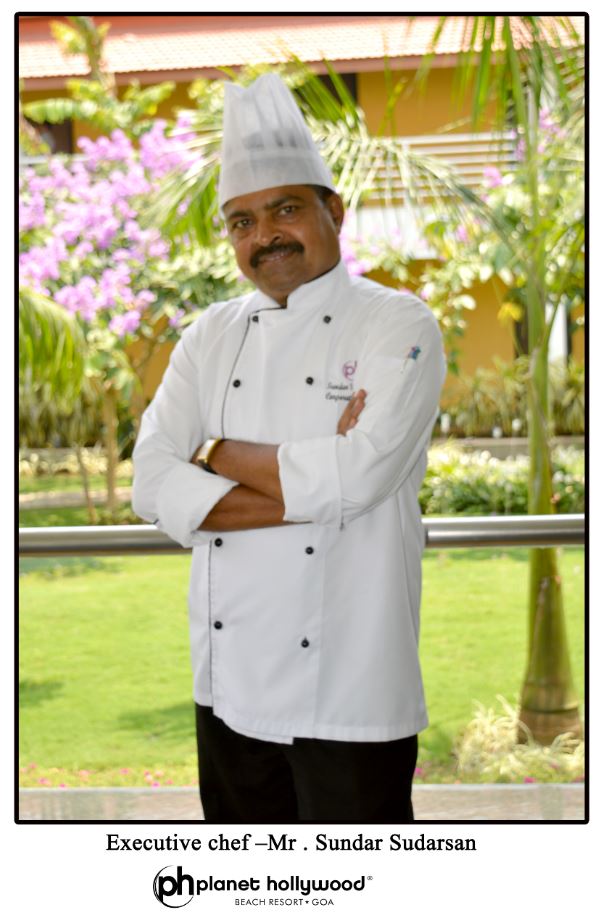 He is a phenomenal chef, who is an absolute legend, having a down to earth persona, who reigns the hearts of the guests with his awesome food which is from another planet. He is very innovative and a great culinary expert who weaves magic with different cuisines.

Mr.Sundar Sudharsan –a chef by fluke, comes from a very conservative Tamil Brahmin family. As it goes, most Tamilians either take up banking or accounting as their career. But Mr.Sundar was advised and inspired by his sister to do something different. He read the book, “The Hotel” and was lucky enough to be selected for Hotel Management course, at one of the then, only, four IHM schools in India. In the final year during the campus interviews, he was left with no option and by default got through for the Kitchen department. He was selected by ITDC and Taj and joined Taj Kitchen Management Training Program.Everthing happened accidentally and he never dreamt that he would turn out to be a chef. From there onwards, there was no looking back.

The Taj posted him to Germany on an exchange program, where he learnt the German cuisine. Shortly he joined a cruise passenger ship in USA and acquired a wide experience of ten years, after which he returned back to India and served as the Executive chef for Oberoi group of hotels for 15 long years. Here he had an opportunity to build up the kitchen of Planet Hollywood, right from scratch, which is now well known for its food. It is a great matter of pride that, presently, Mr.Sundar is engaged in setting up another hotel called Kings Mansion, which will be the best spa resort in the world. Likewise he utilises his wide experience and skills to administer a number of other projects.

He reveals to the readers that, this profession is not as easy as just watching Master Chef. Though it is a very rewarding profession, it takes time. One cannot become a Chef overnight! He uncovers the fact that those wanting to join this profession, need to be patient, one need to establish himself and then can do anything. THE SKY IS THE LIMIT. He asserts that those aspiring to be chefs need to be like our renowned cricketer Dhoni who waits for the last 5 overs. So you also need to wait and have eye for details.

His MANTRA for young, aspiring chefs is “do your vocation with love, patience and passion and not just doing it for the heck of it”. You may face many obstacles, but if you face them with passion, you will win. In this profession, you grow with time and experience. Your value increases along with monetary benefits and you become a vintage crop.

No doubt chefs play a vital role and contribute to the success of every hotel. But Mr.Sundar states that every chef confronts certain challenges. Today a customer is the king/God. So he must be given a patient hearing. A hotel is not just bricks and stones; it is all about people. And people make the hotel. The customer may not always be right, but they are always the customer.So, let the customer be wrong with dignity and respect. He says the guest is always right, even when he is wrong.

Mr.Sundar stated that Mr.Oberoi believes that u need only common sense and eye for detail to run a hotel.

Talking about his failure, Mr.Sundar mentioned that he failed as a director of a company in the restaurant segment. Though he was on a sabbatical for a year, he realised that it was not his cup of tea. And so he returned back to the hotel industry.

Mr.Sundar simply loves to serve people personally. He is enthusiastic and always enters the kitchen with an open mind which is his key secret to success. He recreates a variety of scrumptious dishes only with the ingredients available in the kitchen. He exclaims that even with the last morsel of food served, the guest should be longing to have more and more.

The driving principle of Golden Hours bestowed by Mr.Oberoi has a great impact on Mr.Sundar Sudharsan .He is very much inspired and carries forward this principle in his work culture, according to which, every employee should devote maximum time in serving the guests and not just handle the administrative composition.

There are certain acts of errors committed by chefs, of which Mr.Sundar also admits. One main mistake is losing temper out of frustration and another is cutting corners. He discloses that every chef has a predetermined budget and admits that if a chef involves in cutting corners to control costs, then the goal to serve quality food is defeated. So according to him-never ever compromise on quality.

Keeping oneself updated with latest developments is the need of the hour.Mr.Sundar always keeps himself updated through the internet, along with visits to several hotels. He states that the curriculum of IHM is outdated and needs up gradation very gravely. In addition to this, he says that practical knowledge and exposure should be given to students, along with refresher courses for the teaching faculty.

He believes that you can reach a man’s heart through his stomach. Acknowledgement and appreciation by guests is the yardstick to measure your mark in the hotel industry. You have to be the chef of the guest and not the chef of the hotel.
Chef Sundar dreams to own a unique restaurant –a restaurant without any menu, with just ingredients for the guests to choose from. 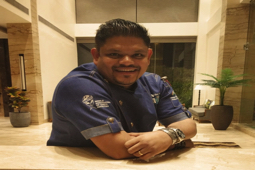 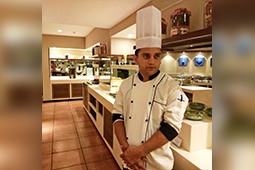 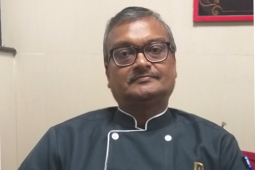